Can More Than One Driver Be At Fault for an Accident in Missouri or Kansas?

Yes, more than one driver can be responsible for causing a car accident in Kansas City. It is common for multiple drivers to share responsibility for the cause of a crash when there are three or more vehicles involved in the accident.

Why is it important to know who caused a Kansas City accident? You must prove that the other driver caused the collision before you can recover compensation for your injuries, financial losses, and damages. Proving fault in a multi-vehicle crash can be complicated, although there are certain things you can do to strengthen your case.

If you share responsibility for the cause of the accident, your compensation could be lower under comparative fault laws. These cases can benefit from the assistance of an experienced car accident attorney.

Below are three (3) common types of accidents that involve multiple vehicles and comparative fault.

In each of these examples, it is critical to understand the law of comparative fault in Missouri and Kansas. This law will have a big impact on how much you may recover for your injuries.

Missouri and Kansas both have comparative fault laws that impact a victim’s compensation for a car accident claim. Under the theory of comparative fault, damages are divided between parties based on their percentage of fault for causing the accident.

Missouri uses a pure comparative fault method for accident claims. If you were negligent, the court reduces your compensation by the percentage of fault assigned to you for causing the accident. For example, if you are 55 percent at fault, your compensation is reduced by 55 percent.

Under a pure comparative fault standard, a victim can be 99 percent negligent and still receive compensation for one percent of his or her damages. However, that is not the case in Kansas.

Kansas uses a modified comparative fault standard for accident cases. The same rules apply, except Kansas has a 50 percent bar rule. If a victim is 50 percent or more at fault for the cause of an accident, the victim cannot recover any compensation for an accident claim.

Do I Need a Kansas City Car Accident Attorney?

Yes, we strongly recommend that you contact a Kansas City accident attorney immediately if you are being blamed for causing a car accident. Insurance companies like to use the theory of comparative fault to undervalue claims or avoid paying valid insurance claims. A common tactic is for an insurance claims adjuster to get a victim to admit to something in a recorded statement that the insurance company can twist and manipulate to allege fault.

For example, you may admit that you overslept on the day of the accident. The claims adjuster asks you what you had to do that day, and you said you had an important meeting. The two of you discuss meetings and how stressful they can be, especially when something goes wrong. You innocently state that you were stressed because you were running late.

The insurance company paints a picture for the jury that you were in a hurry the morning of the crash. You were stressed because of an important meeting, and you were speeding at the time of the accident because you were in a rush. Unless there is convincing evidence to the contrary, a jury may believe this narrative by the defense attorney and find that you were partially to blame for the cause of the crash.

Therefore, it is in your best interest to talk with a Kansas City car accident lawyer before you make any statements or answer questions for an insurance company. If the insurance company even hints that you could be blamed for the crash, stop all communication and call a lawyer immediately.

Call for a Free Consultation with a Kansas City Accident Attorney

Cases involving multiple vehicles and comparative fault are complicated. In multiple vehicle accidents, insurance companies may spend a lot of resources trying to avoid liability for claims. As an innocent victim, you could be caught in the middle of their fight. It is vital that you have a knowledgeable, trusted, and experienced attorney fighting for your right to receive fair and just compensation for an accident claim.

The Law Office of Kevin J. McManus helps accident victims in Missouri and Kansas. Contact our office at 816-203-0143 to request your free consultation with an accident attorney in Kansas City. 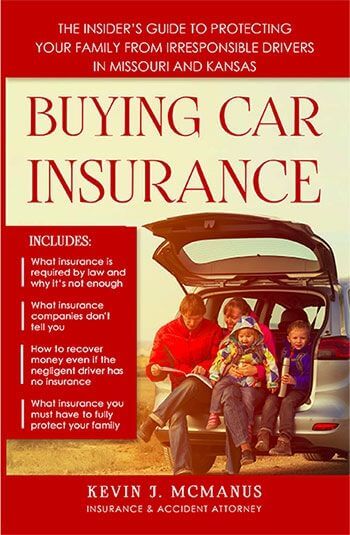